Creative Writing
with Prisoners in Protection

by Stewart Ennis
I work as a creative writing tutor with male prisoners in the protection wing of a maximum security prison. Prisoners are in ‘protection’ because – for a wide variety of reasons – they are vulnerable to attack from other ‘mainstream’ prisoners. Freedom of movement for ‘protection’ prisoners is even more restricted than usual, with less access to The Learning Centre, where the majority of the classes take place. 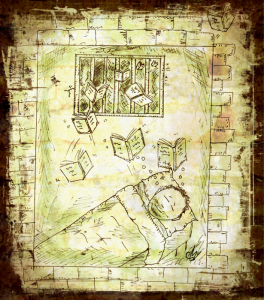 In my class there is a wide age range, from prisoners in their early 20s through to their 60s. Some are coming to the end of a 6, 12 or 20 year sentence, while others have only just begun to come to terms with a sentence of maybe 30 years or more, and are of an age where it is highly unlikely that they will ever leave prison alive.
Let’s take one prisoner in my class. I’ll call him Homer. Up until recently Homer had never written a story or a poem or done anything he’d call ‘creative.’ His reading, if he read at all, was restricted to the ‘True Crime’ genre – very popular in prisons.
Almost everything about Homer’s strictly regulated life (his uniform, his number, his blue plastic cutlery & crockery, the sound of his metal cell door slamming, the prison stamp that appears all through the pages of his library books) seem designed to reinforce one particular aspect of his identity –that of prisoner – even the view from his cell window. If you’re lucky and have a cell on the top floor you might have a view of hills & trees. But Homer is on the ground floor, so his view is restricted to a sheer 20ft grey concrete wall rimmed with razor wire. Also, the thing that Homer is in for, the reason he is here, (the reason I am teaching here) is the one thing that he and I never (for good reasons) talk about, or write about. It is the elephant in the room. On one occasion early on, during tea break, I found myself alone with Homer. He confided that he was wary of appearing weak or of showing emotion in front of the other prisoners in the class. He was quite sure the others felt the same, and quite sure also that they would all prefer it to be otherwise.
It should come as no surprise that Homer, like many prisoners, is on medication for mental health problems.
There have been times when I’d like to have put a brotherly/ fatherly/friendly/ encouraging arm around Homer, but to do so would be to break a professional boundary and might result in losing my job. Likewise, on the odd occasion Homer has talked about missing his family, I have wanted to tell him that being a father myself, I understand; but again, to talk about my own family would be to cross a professional boundary. So, I talk in generalizations, always, keeping my distance.
Initially, Homer’s prison narratives tended to be about just that, prison – about being a prisoner. This was understandable; prison was Homer’s world. But I wondered if part of my role as a creative writing tutor might be to encourage Homer in the process of creating new narratives ‘for’ and ‘about’ himself. Now, in an environment like a maximum security prison, any small act of creativity and imagination is quite an achievement. But the creation of new narratives felt important for other reasons too; it might alter how Homer saw himself, and , perhaps, help facilitate positive change.
And so it proved. Through the sharing of stories and poems in the creative writing class Homer and the other prisoners began to see one another – and themselves – in a new light. Just as important if not more so, Homer and the others began sharing their stories with family and loved ones on the outside. This was quite a revelation for those wives, sons, granddaughters and friends who received for the first time ever, a poem or a story or a song written in prison, by someone who in some cases, they’d known all their lives. It was certainly a revelation for Homer’s family;

“I never knew you wrote poems!”

“Did you really write that story?”

“Did you really write that song?”

“Did you really write that poem?”

“I’ve never seen this side of you before!”

“And I thought I knew you!”

“I never knew I could write poems!”

“Did I really write that?”

“I’ve never seen this side of me before.”

Then I asked Homer and the other prisoners who were allowed visits from their children and grandchildren: “What story books have you read to them?” And then quickly added, without pausing for a reply, “You might want to write your own bed time stories for them.”
I was making some huge assumptions here; that everybody has been read a bed time story and that every parent reads their child a bed time story.
They were false assumptions!
So, I brought in a few of my daughter’s picture books; old favourites like We’re Going On A Bear Hunt by Michael Rosen and The Tiger Who Came To Tea by Judith Keir. I handed them out and suggested that we go round the table, reading a page each. No one felt comfortable with that.

“My voice is really bad,” they said.

“My voice is really boring,” they said

“You’ve got a good voice, you bring it alive,” they said, to me.

Why not read to them? These were books I loved. These were people who’d never had a story read to them. Why not give them a treat. I admit it did feel odd though, reading We’re Going On A Bear Hunt’ to a group of great big grown up prisoners, but I agreed. They sat in a group at one end of the table, and I on the other, the inside of the book turned towards them so they could see the pictures and follow the story.
I began,

“We’re going on a bear hunt.

We’re gonna catch a big one.”

Their knees were up to their chests, their arms folded around them, heads to one side.

“What a beautiful day!

I finished. They loved it. They had never heard the like of it. They loved being on such an unadulterated flight of fancy. One prisoner asked,

“Can I borrow it to read to my grandson? He’s on a visit tomorrow.”

“Another one,” said Homer.

So I read the Tiger Who came To Tea. Again, the same reaction. It wasn’t just the story; (though it’s a great story) it was the act of being read to. It was the receiving of that gift. The reading of a bed time story.
That was my way of embracing them then. That was my friendly/fatherly/ brotherly arm around their shoulder – achieved without breaking a professional boundary.
Homer and some other prisoners started to write stories for their own children, grand children, nieces and nephews, to read at visits, or for them to take home and be read at bed time. The feedback that Homer and the others got was wonderful,

“I read him your bed time story last night. He loved it!”

Homer and the others had reached into themselves, and reached out to their children and loved ones with the gift of their own imaginations.
Homer had created a new narrative about himself, that wasn’t all about being a prisoner.
* * * *

On my first day I thought I’d start off with something everyone could relate to.
“I’d like everyone to write about a happy childhood memory,” I announced, “One Christmas morning, a birthday party, a summer holiday, that sort of thing.”
Some people started straight away but most were thinking about it for what seemed an inordinate amount of time.

“I don’t have one!” said one prisoner.

So, don’t assume, as I did, that everyone has a ‘happy childhood memory.’ Don’t assume that everyone has had a bed-time story. In fact, don’t assume anything. Certainly not that we all share the same or even similar life experiences.
Okay, maybe there are a couple of things you can assume; simply that we all have stories, and that these stories are well worth the telling and well worth listening to.
email: stewartxennis@gmail.com