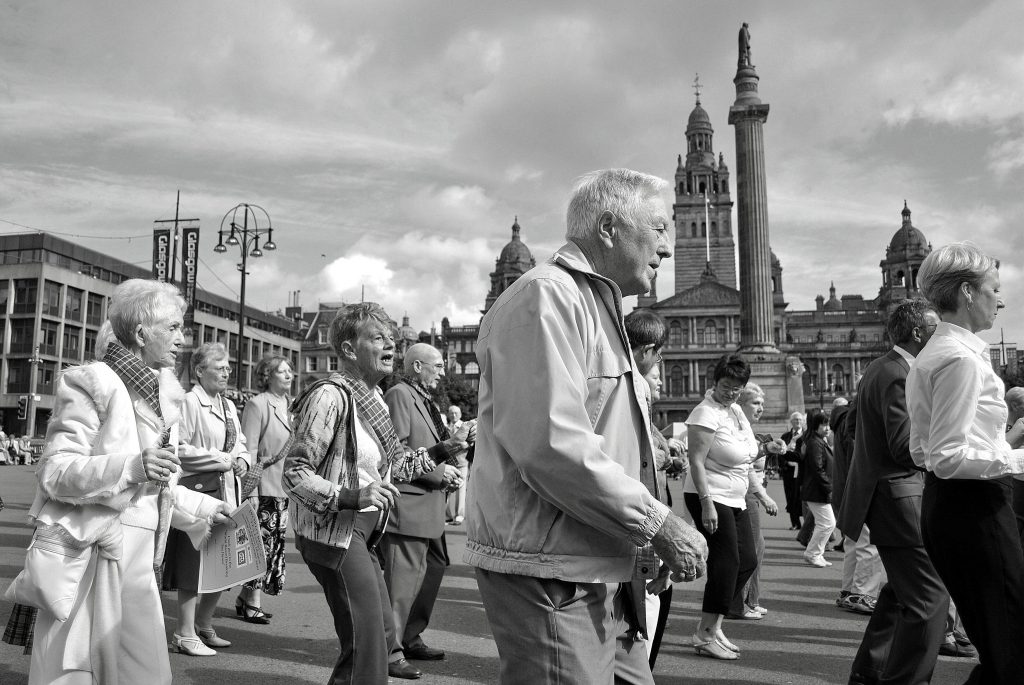 (with examples of specific choices for subject matter)

This tool was commissioned as part of the Words Work Well for All project (2018-2019) funded by Glasgow City Health and Social Care Partnership via the Wellbeing for Longer in Glasgow Fund. It describes a workshop that took place on the Peccadillo Barge as part of the Water Story strand of the project.

Attendees sit in circles or opposite each other so each person can look at someone opposite themselves.

Someone then leads off by eyeballing someone, or calling out their name, then they make as if throwing a clap at the person they are trying to engage.

The person being eyeballed, name called, makes as if catching the clap in their hands, then repeats the throwing of the clap to another. Each time the clap is thrown it can be varied in style and delivery. They do this till they go around everyone at least once to make sure all are involved.

They then alternate doing this with each person starting the sequence anew.

Then one person replaces the number 3 with an action and sound.

(Again, they alternate the delivery a few times.)

Then replace 3 and 2 with a different action and different sound.

Then replace 3 and 2 and 1 with differing actions and sounds.

(Finally alternating the delivery of the three actions/sounds.

Say, “GOOD MORNING” to each other, shaking hands whilst doing so, as if really good friends.

Then reverse the situation and say, “GOOD MORNING” to each other as if you are cold strangers. TOUCH each other’s hands as if enemies.

Next, a couple of ice-breakers that show how introducing conflict and considering setting can affect a scene.

Two student’s improvs as strangers sitting on a park bench.

When the offended person walks away another student takes their place then the roles switch.

Repeat a number of times till all students have had a go.

Experiment differing effects by students considering different settings and how they affect characters and tension etc.

Two students do 2 improvisations set within an imagined bookshop.

1)      In the first scenario, one plays a very helpful bookshop server. The other plays a disgruntled disappointed customer, who nevertheless is overly helpful to the server resolving the problem of them not having received a particular book they’d ordered. Both actors are supportively nice and mannerly.

2)      In the second scenario, one plays a server who doesn’t give a toss about finding a resolution to the customer’s complaint about the missing book. The other plays a disgruntled customer that begins to lose the plot because of the level of disservice they’re receiving.

3)      Ask students which scenario they found most engaging?

Set this drawing very much in a specific place and time. Always consider the setting.

Spend a bit of time considering any fragments of memory that present themselves and make a note of them on your memory map.

NOTE: Worksheets can be photocopied for students to use, Please see attached PDF

This was written after doing an initial CLUSTER, SKETCH AND FREEWRITE, as a final piece with the SUBJECT being My First Tea-Dance. (My first experience of …)

George Square is a public square where people can take part in the various festivals or events that are staged in Glasgow, or they can just sit on benches and watch the world go by.

During a recent Christmas holiday there was an event called Winterfest. It had a carousel with wooden horses, an ice-rink, a helter-skelter, vendors selling burgers, hot chestnuts, candy floss. Souvenir stalls and an open-air stage where shows and music and the screening of feature films took place.

The event I liked most was the Guinness World Record Tea-Dance attempt at having the most couples take part in an open-air tea-dance.

A tea-dance takes place in the afternoon and is where dancers usually dance to big band style music and have a scone with a cup of tea. They are usually mature people but in George Square there were all ages taking part from toddlers right through to grandparents.

The band, Swing Sensation, were on stage dressed into Santa suits and because it was in the middle of winter, all the dancers were wearing coats, scarves, boots, hats and even some were still carrying their shopping bags or had backpacks on while they were dancing. There were waltzes, foxtrots, quicksteps, tangos, rumbas, the Gay Gordon etc. and the dancers soon smashed through the world record of 195 couples.

What I remember most was the image left imprinted on my mind, through the frosty breaths coming from the dancers, of their smiles, as warm as the cups of tea cradled gratefully in their hands during their afternoon of festive frolics.

The barge is ideal for students to be taken to another spiritual space in their heads and physically whilst sailing along the canal. In the main, students enjoy the chat and sail therefore little writing on the page is done during this time.

The result is that the sessions are broken up into 4 sections.

Element 4) can cause problems fitting into a comfortable timeslot as there becomes a stand-off between doing the writing and doing the sharing i.e. not enough time for both. I’d suggest the students focused more on the writing and consider sharing the results of their labours during a recall session at another time. This way the students get more mileage out of the visiting writer, in my opinion. This is an oft repeated scenario with most groups – they are keen to write and keen to share.