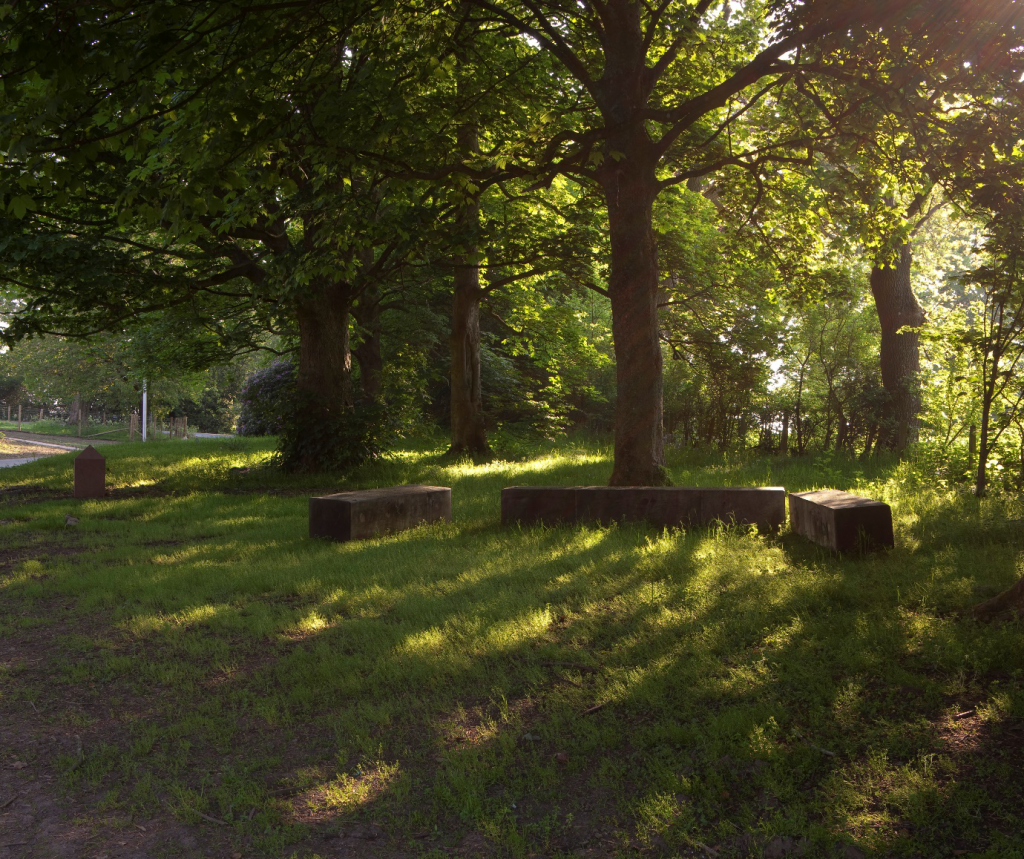 It’s all about empathy. Research and empathy. Empathy when midway through a conversation a woman stands and walks away, called by a mysterious force, like a wild goose in the sky above, heading off on an ancient migratory route.
What’s the purpose of poetry? Well, in some of my work, it’s coincidentally therapeutic; by which I mean (if I’m successful) it does what poetry does best: frees us from a daily round of inner monologue and can waken us to something larger than ourselves. I’ve worked in many health situations as a poet.
At the then Royal Crichton Hospital in Dumfries, I was invited to become the poet in an artistic team that would mark the transition into a new acute mental health hospital across the minor tree-lined road.
The Crichton was set in acres of trees, calm walkways, avenues, running water and in the distance, the ever-present Criffel, an isolated, massive, prominent hill. Patients and staff loved the apparent solitude, the history of the place and its calmness granted by the proximity of trees and waters.
Research took me into many areas, but it all came back to the patients and those lush green surroundings. It was the green surroundings I chose to pursue in workshops.
Staff were always busy and often needed to rush away in the course of discursive workshops. Patients sometimes lost interest and demonstrated it with their feet. Some were also suffering from Alzheimer’s and followed only so far.
How to engage them all? Well, memory proving an infallible source of inspiration (though sometimes edgy and even dangerous for some patients), we travelled those lanes in the form of remembered gardens, window boxes, rural memories (D & G is primarily a large rural county), farm animals, pets and wild life.
After many sessions, notebooks replete with flowers, trees, dogs, cats, hens, cattle, old songs and stories of how things were once done, my work could begin.
It was also apparent that though enjoying the possibility of walking in huge grounds for the quietude that can bring the start of healing, there would be little opportunity for this in the smaller hospital set in a garden with distinct boundaries. Indeed the possibility of a walk was often beyond some patients, through medication or physical constraints.
How to encourage walks? In my many wanderings around the hospital building site, the happy discovery of an overgrown avenue, which, cleared and trimmed, led to a now favourite stroll. The walk is encouraged by staff, and its start can be seen beckoning from the main entrance. It begins with an oak bench seat and two sandstone pillars to echo the gateways of the region. It ends with a bench from which there are views of Criffel, and two more sandstone pillars. The poetry is in the walk, which can be done in stages, and which gives those who find difficulty in walking a sense of achievement. The words? Well they were nowhere on the ground, not on paths, but, in order to allow folk to look further than their tired feet and out into the wider world, were carved into the pillars. They reflect the aspirations of memory sessions, but obliquely; so that not everything can be taken in at one walking; needing reflection, encouraging folk to return for another journey, exercising mind with body. Each pair of pillars has a poem which reflects the other and the second set of pillars, but neither is challenging, rather perhaps enigmatic, leading the mind off and away. In addition, in case the first set is missed, the sight of the second set may trigger a search of the other poem-inscriptions. Once known, the walk may be approached also from the “end” meaning there is no one way to approach this walk. Inscriptions echo this, not being narrative in nature, rather mirroring the peace of this corner of the hospital grounds. 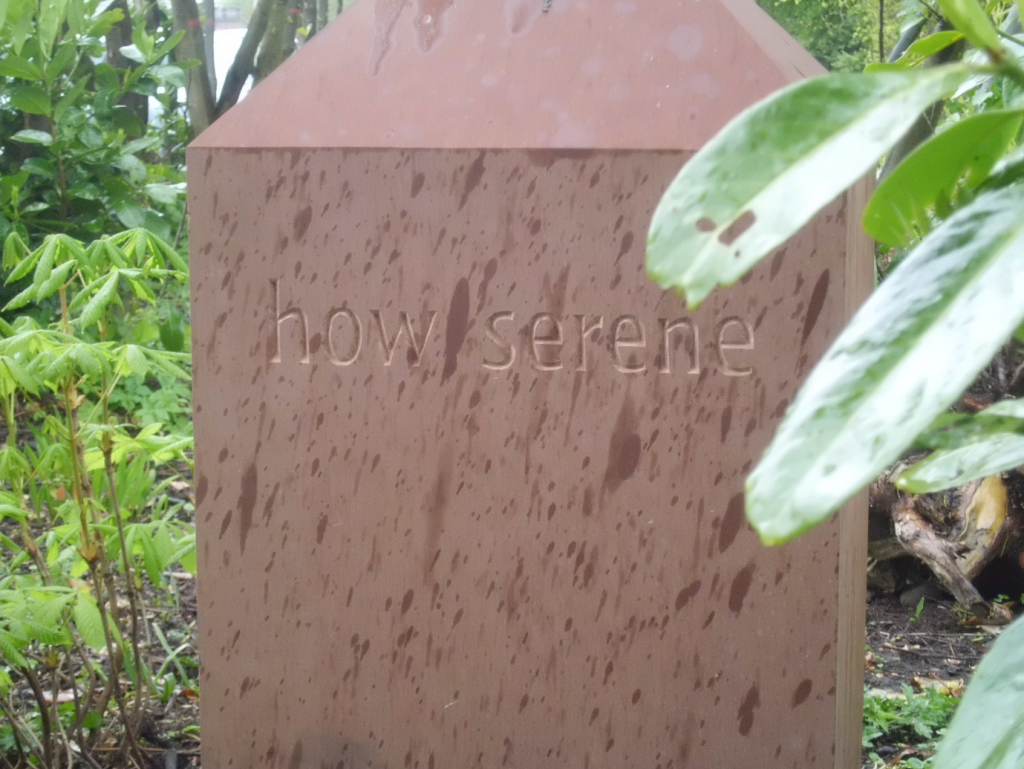 Not all patients, however were in a position to walk. Some indeed were in the hospital to protect themselves and others. These more acute patients had a secure courtyard into which they could walk, open to the sky, but with little greenery. The task was to deliver a metaphoric and imaginative surrounding, at the same time offering no ligature points or other potential hazards.
The obvious option in the absence of trees, was oak cubes, far too heavy to be lifted, with poems inscribed in order for patients to discover the “set”. The inscriptions were short poems, each of two words, sometimes on the seat and sometimes on another face of the cube, to promote a little curiosity, moulded in bronze and inset in such a way to be immovable. The benches were set on grass. In the corner of the courtyard we set a safe speaker with the low sound of babbling water, recorded from the waterfall in a rockery at the Crichton and which many patients and staff fondly remembered. Poems reflected sounds which can be heard in any quiet garden setting: birdsong, bees at pollen; together with the water sounds these made a harmless but enchanting soundscape. 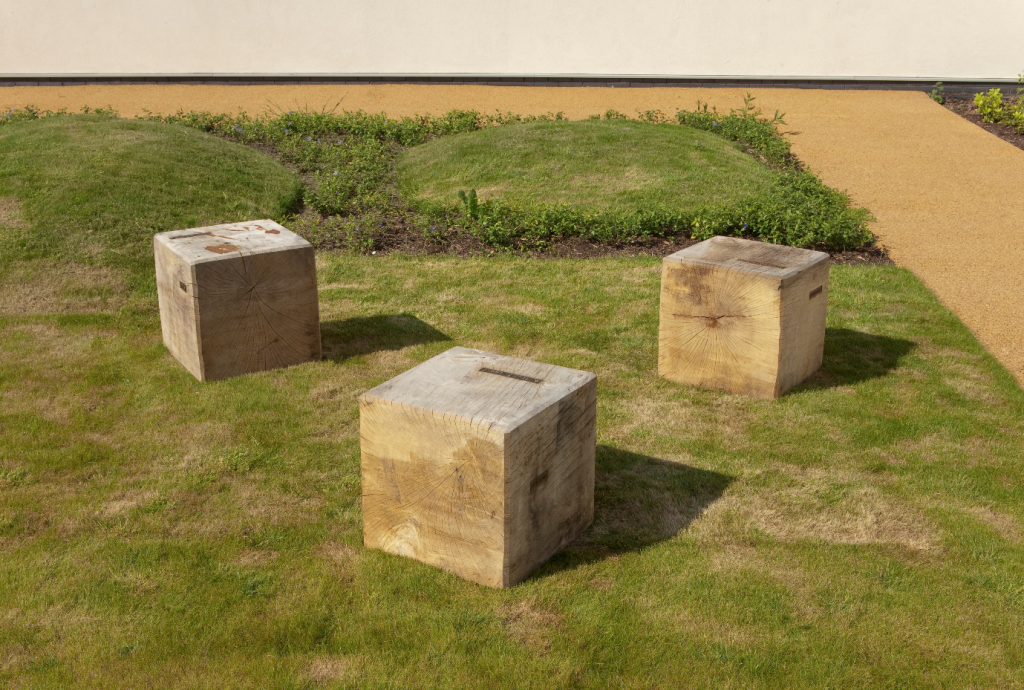 Inside the wards we brought together poems, plants and patients in the form of cyanotypes made from plants collected in the gardens of Crichton by patients who had taken part in the memory sessions. These are hung together with the poems supplied by me.
Elsewhere, dotted round the hospital waiting to be found are one hundred small landscape photographs which might be recognised, since they are all of Dumfries and Galloway and were made after a survey of the key locations from which patients come. They provide a sense of both distance and proximity “In here I can see I’m not so very far from there” as one patient remarked. 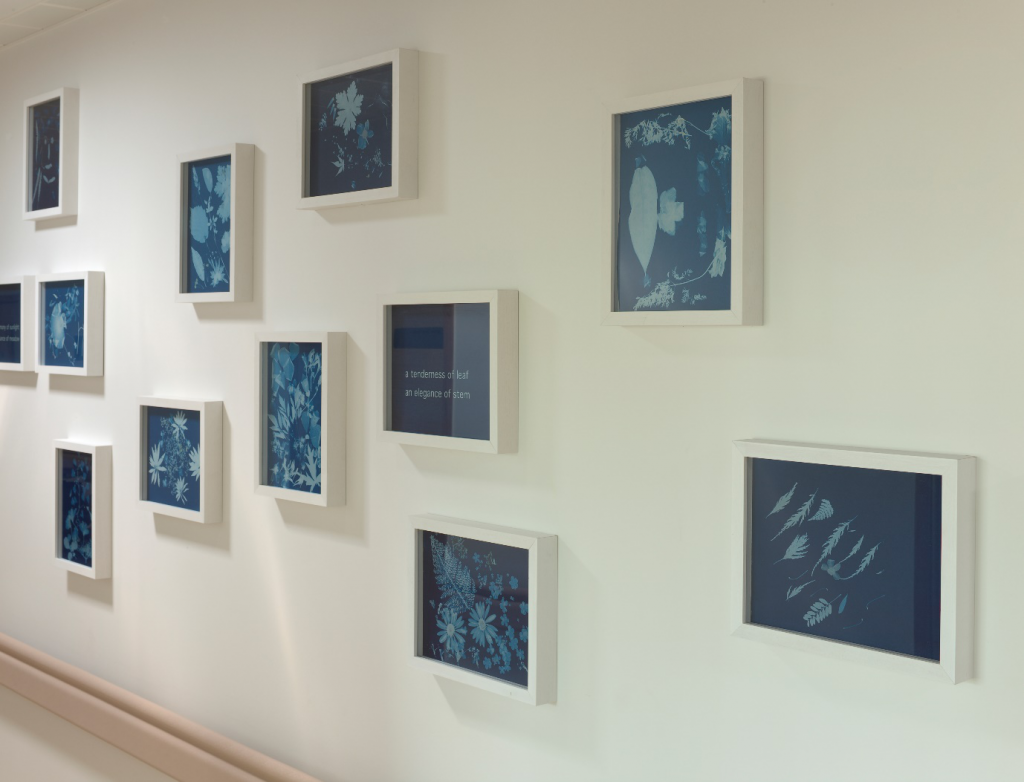 At Midpark there is also a smaller version of an original farm on which patients offered voluntary work: a small herb, flower and vegetable garden. The benefits of gardening for those able are well known and lasting. This garden is worked with the assistance of a professional team by patients in the halfway houses: secure self-catering flats for patients who will soon be returning to the outside world. Here we planted secure botanic labels, each with the name of a herb or flower, each bearing a tiny poem, to be discovered at random by gardeners.
The new hospital is bounded on one side by a public path. Patients who are able can walk here, just outside the boundary of the hospital, in a more energetic way. Here, we placed milestones. Each encourages further exploration and is inscribed with a poem across two faces. At the midpoint are benches, for rest, for lunch or for quiet contemplation amid the tall ash, oak and horse chestnut trees. The hospital is on a curve of hill with overhead the north-south seasonal migratory route of wild geese who rest on the nearby wetland reserves. The poems on the milestones reflect past walks among trees, the view of Criffel, the long view, the earth’s curve, the upward, soaring flights of noisy geese, passing through; all is designed and written to encourage healthy walking and outward (upward) looking.

The poems, the artworks, the walks and memories; the research into hospital archive; the farm and gardens and encompassing natural all-embracing security; the poet, the artist, the patients, the staff, the plants all came together to make integrated community artworks and poems that may be enjoyed by all. Those with the memory keys may find something extra. Those seeking solitude may find it. Above all, those seeking healing may be inspired by walks, soundscapes, views and poetry.
This is the work, and one purpose of poetry.
The poetry is out there, in the landscape, freed from the page, back into the wilds from where it entered our consciousness so long ago, harmonious and healing.